I'll be with the Couscous Collective at the Alternative Press Expo this weekend. Tables 307-308.  I'll have all three Skin Horse books and the Narbonic Perfect Collection, so it will be awesome.

This month only: Buy any Narbonic or Skin Horse books, get original strip art!

Mark your calendars: we're having a release party for Skin Horse Volume 3 on Saturday, August 25. 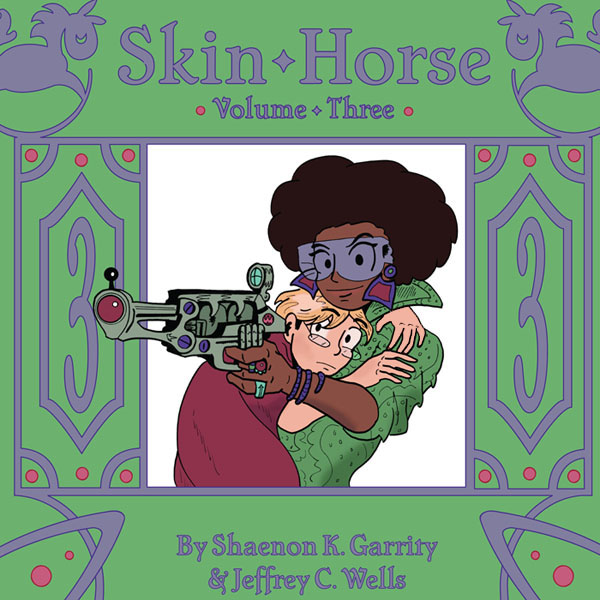 There will be cupcakes, wine, dramatic readings, and, of course, Narbonic and Skin Horse books for sale.  As an added bonus, my family will be in town!  Come down and ask my mom inappropriate questions! 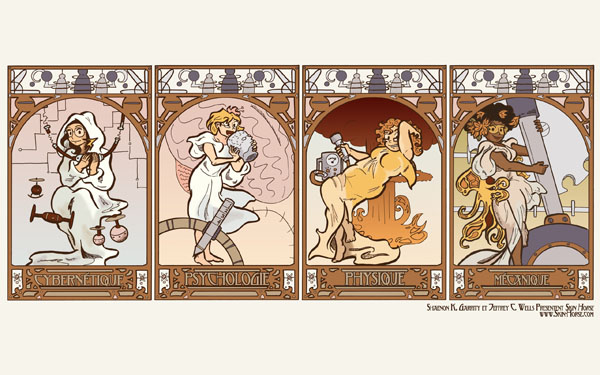 I'll be spending most of Comic-Con weekend at Trickster, located at 795 J Street. You can also meet me at Comic-Con at these events:

I've got a story in the debut issue of James Gunn's Ad Astra: http://adastra.ku.edu/colorless-green-ideas-shaenon-k-garrity

I don't like to rant on the Internet.  I prefer the surgical strike.  Precise.  Cleansing.  But sometimes a lady just gets all pissed.

So the Cartoon Art Museum has a new show up, a retrospective of the history of MAD.  Thanks to the generosity of many lenders and the hard work of the museum's tiny staff, the show includes Kurtzman cover roughs, classic Elder parodies, Jaffee Fold-Ins, Spy Vs. Spy strips by both Prohias and Kuper, one of the two covers ever drawn by Sergio Aragones, and work by present-day contributors like Keith Knight and Chris Baldwin.  Andrew, the curator of CAM and my main squeeze, says it's the best show he's ever curated, but he says that a lot.

I wrote the wall text for the show; I do that for CAM shows when the staff is swamped.  While I was at it, I also wrote up text for a set of extra labels, just fun facts: how many issues Sergio Aragones has appeared in, this funny thing Al Jaffee said, etc.  One of the common criticisms the museum gets on places like Yelp is that we don't provide enough context for the pieces, and I'd like to correct that by giving visitors a little bit of inside information.

Yesterday I noticed that Andrew hadn't included my little factoids in the show.  When I asked him about it, he confirmed that, no, the museum didn't print them.  Because it couldn't afford to.  The Cartoon Art Museum is on such a tight budget that it can't afford the cost of mounting a half-dozen extra labels on foamcore down at the copy shop.

This goes on all the time, of course.  CAM survives by cutting its operations down to the bare bones.  But that doesn't make each penny pinched any less painful.

So you can imagine my delight today when I learned that webcartoonist Scott Kurtz is busy trying to convince people not to donate to comics nonprofits.

To be fair, Kurtz's post isn't directed at the Cartoon Art Museum.  His primary target is the Hero Initiative, an organization that pays the medical costs of cartoonists who lack health care.  Many of the Hero Initiative's beneficiaries are older comic-book artists who, to put it bluntly, got screwed over by their publishers.  Kurtz is opposed to the donating to the Hero Initiative because...

Okay, I don't know.  I'm not sure if he even believes half the things he posts on the Internet.  I hate responding to him at all, because, when he dismissed giving to the Hero Initiative as "slacktivism" and sarcastically mocked the people who do so, it's likely that the only thought going through his head was, "Holy shit, some people who aren't me are getting attention!  And frankly, they're getting attention because they're better people than me!  To my blog!"  By acknowledging his little online asshole dance, I'm just giving him what he wants.  So I'm a sucker.  Sue me.

Kurtz doesn't like that a small online movement has started encouraging people who enjoyed the movie "The Avengers" to give to comics nonprofits--mainly the Hero Initiative, but also groups like the Cartoon Art Museum, MoCCA, the Cartoon Research Library, and the Pittsburgh ToonSeum--as a gesture of support for the artists who created the Avengers, because Marvel and Disney have been adamant in their refusal to do so.  This little movement isn't telling people not to see "The Avengers."  It's just saying, "Hey, the companies that made the movie aren't supporting the original writers and artists, so let's step up and support them ourselves."

Kurtz is mad about that.  Because I don't know.

I don't get the mindset that makes people write this stuff.  I just don't.  I mean, okay, sure, sometimes we all think things like, "Man, I hope the artists I admire die penniless and suffering, and no one reaches out to them in their moment of need."  But most of us, before we share this thought with the world, stop and think again, and we realize, wait, no, that's awful.  If there's one thing the Internet has taught me, I guess, it's that some people don't have that crucial second thought.

Comics nonprofits run on the thinnest of shoestrings.  They're not a popular target for grants or large donations.  They live or die on the generosity of individuals who love the art form, people who can't give a lot but somehow manage, together, to give enough.  Telling people not to give to these nonprofits--actually mocking people who do so--is rotten behavior.

Kurtz visited the Cartoon Art Museum a couple of years ago--in fact, at the same time the museum was putting up a show of work by artist Ed Hannigan, who has multiple sclerosis, to benefit the Hero Initiative.  Kurtz seemed to have a good time.  But maybe he was thinking what a shame it is that we get just enough help from fans to stay open, and hoping he could change that situation.

Or maybe he doesn't think about a blessed thing that pops into his head before he posts mean-spirited crap on the Internet.

Anyway.  Rant over.  And here's the Hero Initiative website again.

To celebrate, and because we keep thinking of stuff, we've unlocked two new bonus levels: Investigator Into the Conspiracy and Arbiter of Reality.

So, yeah, spread the word and such.

Over the past weeks, I've watched in dismay as the debate over the Affordable Care Act turned into an attack on women's health, right-wing pundits railed against birth control, politicians defended draconian anti-abortion laws by comparing pregnant women to breeding livestock, Republicans united to block the Violence Against Women Act, the governor of Wisconsin repealed equal pay for women in his state, and yet another ugly, divisive war over working vs. stay-at-home mothers erupted in op-ed pages nationwide.

So I'm sure you can imagine how thrilled I was to discover that, this week, Newsweek has chosen to devote its cover to the most pressing issue in the lives of American women today: business ladies who like BDSM. Tomorrow, when I'm fighting sexism in my industry and searching for a health care plan that covers maternity costs, I'll head into the breach armed with the memory of beloved date-rape apologist Katie Roiphe telling women they secretly hate having jobs, rights and respect, and fantasizing that a good spanking would make those headstrong feminists give up on that silly "equality" business.

And look! There's also an article on how the Duchess of Cambridge is enjoying her first year of princesshood!

Thanks for keeping me informed,
Shaenon K. Garrity

P.S. In all seriousness, pull this crap again and I'll cancel my subscription.

If you're curious about how the upcoming slipcovers for Skin Horse Volume 3 will look, check out the photos of the Narbonic slipcovers. They'll be like that, only more Skin Horse. Any more would be telling...